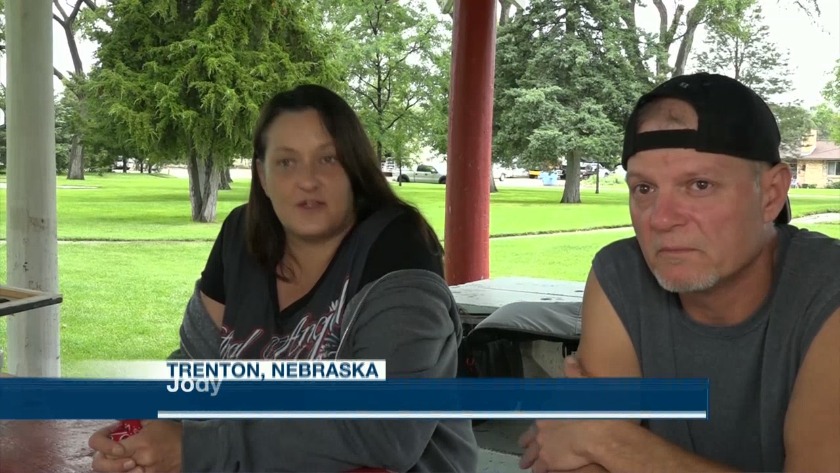 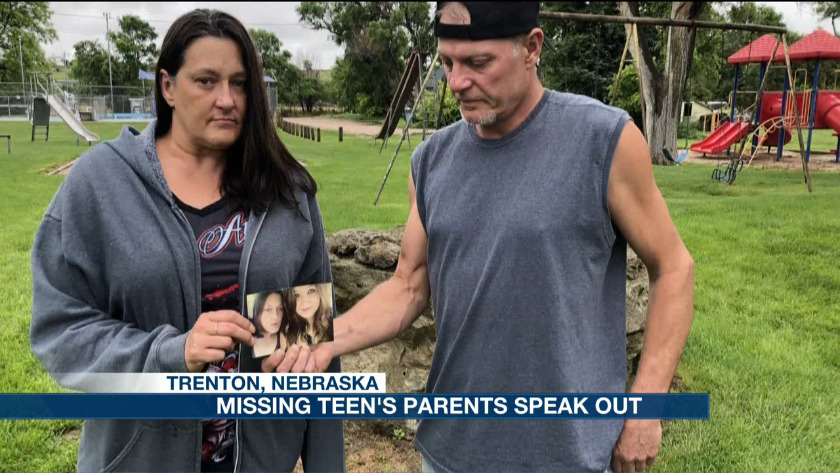 TRENTON, Neb. (KNOP) - Sunny Sramek's mom, Paula Johnson, says, "Keep tabs on your children. Know who they are talking to. Know what they are doing on-line. Because one moment they're there, and another - they just aren't."

Paula Johnson and Jody Sramek, parents of missing Trenton teen, Sunny Sramek, visited Tuesday about the disappearance of their only daughter. (KNOP-TV).

Sunny Sramek left her home in Trenton where she lived with her mom on April 20, 2019. It was the Saturday morning before Easter. She had chatted with her dad, who lives across town, also in Trenton, just days before.

She left with an acquaintance - a man - who said he was going on a road trip. The name of the man, released earlier in conversations and on social media, is being withheld at this time at the request of law enforcement, and for their investigative purposes. Dad, Jody Sramek, has reiterated the importance of listening to the advise of law enforcement because "they know more than they can say, and we do not want to put my daughter in more danger." He explained that if names get thrown around, it could scare off individuals who might know something. Both Jody and Paula say the FBI has treated them very well.

The Hitchcock County Sheriff's Department declined to make any comments on the case.

Jody Sramek did not hold back emotion when he talked about his last visit with Sunny, nor when he shared how he still thought of his daughter as a four year old little girl. Sunny is now 18 and too old for an "Amber Alert." So it took a while, and a lot of investigative work on the part of several agencies before the FBI could release an official missing poster.

Paula says that she and her daughter were less like mother and daughter and more like best friends. She said she knows if Sunny could get to a phone she would have found a way to let Paula know she was ok. "There's no way she would go this long without letting me know she was ok." Paula also says there's no way Sunny would leave her cat, KikiMeow behind. "That cat just sits in her room and cries out for her. I have to go calm the cat down." And there are Sunny's grandparents who live next door. Sunny's grandpa, Cliff Johnson, says, "She wouldn't be gone this long without contacting her mom."

Reni Blome, Sunny's cousin, was way ahead of the agencies, never pausing a single day. Blome has a law enforcement background, and used her knowledge to keep pressing forward for her young cousin. She set up a Facebook page, "Find Sunny Sramek" just six days after Sunny went missing, long before law enforcement would eventually take the case seriously, ruling out chances that she was a run away or "old enough to just leave on her own." She has also set up a "Go Fund Me" page to offset the cost of printing flyers, and "all that ink."

Flyers have been distributed across the state of Nebraska by Sunny's own mother who is trying to "keep it together" while also working for the Postal Service as a mail carrier in rural Trenton.

Sunny's parents tell the story of a bright, artistic daughter, "Her grandma was an art teacher, and her grandpa was a science teacher here in the area. We were always finding ways to expand her knowledge and experiences." Paula says Sunny loves to draw, "like dad," and dance class when she was younger was a favorite thing to do. She says dad, Jody, taught her to drive, let her help with cattle, and was with her when she shot her first turkey.

Sunny has many friends and family members in the Trenton area. Her parents say she went through a rough spell and struggled in school. They say she experienced bullying and eventually transferred to McCook to finish high school, a goal she was currently completing at the time of her disappearance.

Sunny is also married, which is a subject which has not been largely discussed. Her parents say she married young, believing it was a good choice, but went through more growing and trying to do things right, so was currently living with Paula to sort things out. Her husband is not being named in this article, but Sunny's parents say he his struggling, too, to deal with Sunny's disappearance.

Paula Johnson has offered a reward of $1000 for information leading to Sunny's return. Jody Sramek also said he would give everything he has just to have his daughter home.

Sunny Sramek was born on February 23, 2001. She has brown hair and blue eyes. She is 5' 7", and at the time of her disappearance weighed 183 pounds. Sunny has a tattoo on her left shoulder of a feather with the letters "FLY." She also has a tattoo on her right ankle of a tribal sun in red ink.

She was last seen in a 2004 white Ford Explorer bearing the license plate HGJ341. She was last heard from by her mom, Paula, at 12:45 p.m., calling from a borrowed phone to say she made it to Holdrege, Nebraska. No one has heard from her since. The family has said they thought she was making a road trip to Omaha, but they cannot say if she ever made it past Holdrege, and could be anywhere now.

Anyone with any information regarding this case is asked to contact the FBI Omaha Division at (402) 493-8688.

Contraband confiscated at NDCS in Lincoln during lockdown

Contraband confiscated at NDCS in Lincoln during lockdown